The time has come to document our flood adventure. Strap in, this will be a long one (plenty of pictures, though). Here’s what happened that day and in the weeks since.

We woke up at about 7:30 in the morning on Sunday, July 12th. It was raining hard, but we honestly didn’t think a whole lot about it. We just lazily got Thea up and dressed, and headed downstairs to the living room. Luke noticed the sump pump could be heard running non-stop. He went downstairs to check on it and, moments later, yelled my name. After planting Thea in her Exersaucer to play, I followed him down to see the sump was quickly filling with water. The pump continued to run, but it was obvious that it couldn’t keep up. As we stood there, the water level reached the surface and started to seep out onto the concrete. I dashed upstairs to grab every towel that I could find. By the time I got back downstairs a single minute later, it was too late; there was no stopping the water flowing into the basement. 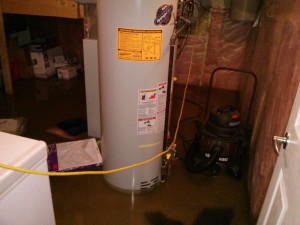 The final nail in the coffin was the power failure that occurred almost immediately after the sump pump was overwhelmed. Within 10 minutes, there was a bang at the door and our fantastic neighbour announced his generator was running and ready for us to connect to our pump. Even so, it was amazing how much water came in during that brief window of no electricity. 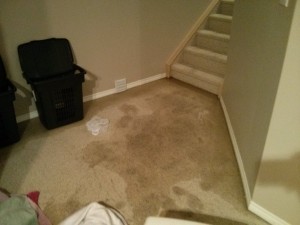 At that point, we knew all that was left was to grab the most important possessions and bring them to safety. The bassinet was first to be carried away – Thea was the seventh baby to sleep in it, as it was over 30 years old and had been used for Luke and his siblings, as well as our niece and nephew. A few other things were moved to higher ground but, to be honest, I think our shock hindered our reaction time and made us underestimate how deep the water would get and how many things should have been immediately moved. 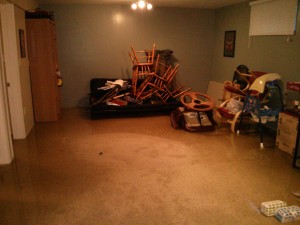 One mistake was forgetting my scrapbooks were all on the bottom shelf of one of the bookcases. They ended up sitting in a few inches of water until Luke’s sister rescued them and spread them out to dry. Damage was not nearly as bad as I would have expected – The eight book covers were all totalled, but the vast majority of the pages were dry or salvageable. 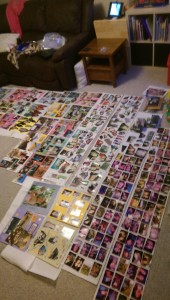 As mentioned in an earlier post, we sounded the alarm at 8:09 AM by sending a text to all family in the area. Within the hour, we had a half-dozen people in our home, hauling storage bins and laundry baskets full of our things up into the garage and dining room. Luke’s brother brought a pool pump rental, which picked up the slack from the sump pump. Once that was hooked up and pushing water out a window, the water level stabilized and eventually (slowly) started to drop back down. Shop vacs sopped up the remaining water that didn’t flow back through the pumps.

Near the end of the day, we tore out the carpets and hauled them out onto the driveway.

(Note that I say “we” many times in this post but, truthfully, most of my day was spent doing Mom-stuff. I’ve never felt more useless, but I suppose someone had to fill that role…)

I’m so glad we took that step, as we’ve been told by our contractor that removing the carpets quickly would have helped to prevent additional damage and reduce the chances of mould growth. 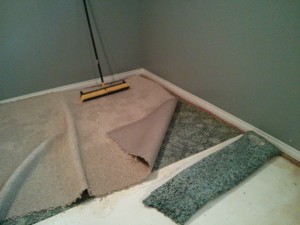 So – that was the day. Over 150 mm of precipitation fell within two hours. Water flowed into the basement through the sump, sewage drain, toilet, and shower. It reached every corner of the basement and, at its peak, was approximately five inches deep.

It’s funny, I say that number and it seems so insignificant. In 2013, High River homes were invaded by eight feet of water (on top of three feet of mud). One year later, SE Saskatchewan residents found themselves under several feet of water. By comparison, I feel our situation is somewhat unworthy of complaint. Heck, there were people in this flood who experienced far more loss than we did (the photo at the top of this post is from the storm pond across the street from our house; it overflowed to the point that it was literally pouring into the doors and windows of homes that back onto it). The reality is that we have over $30,000 worth of damage and so, we have innumerable things to be thankful for, but nonetheless – July 12th, 2015 sucked.

Since then, most of the “emergency” work has been completed. Luke, along with both our brothers and my sister-in-law, tore out two feet of drywall and insulation. The space has been professionally cleaned, sanitized, and dried. All the debris has been taken, through the use of my uncle’s truck and family manpower, to the dumpsters set up around town for that very purpose. The water heater has been replaced, the new furnace will arrive this coming week, and the new washer and dryer will arrive in another two weeks. In the meantime, it is summer, so the furnace has not been a concern (though I have been spoiled for the past two years and now greatly miss my air conditioning), and I’ve been aided by family in keeping up with laundry. 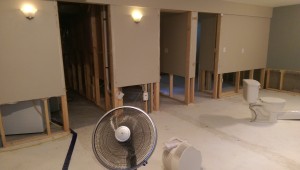 Thea was a dream that day, and in the days afterwards when her play area was reduced to the living room, cordoned off by storage bins to form what I called, “her safe space”. Over the next week and a half, I went through the contents of each bin before moving it to the garage for extended storage. Why? Because nothing makes you decide you have too much junk in quite the same way as when an emergency has you dragging every piece of it up a flight of stairs. I now have three or four bins worth of “stuff” that will be either sold or given away/donated. 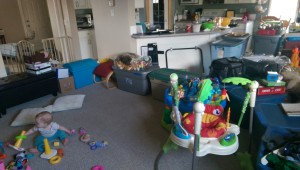 The same storm (and a second storm two days later) brought enough large-pea-sized hail to cover the backyard in a sheet of white and damaged
our roof. Haven’t heard from our insurance company yet to know if we will have any coverage for those repairs (the inspection was just done on Friday; I expect we will know more this week). 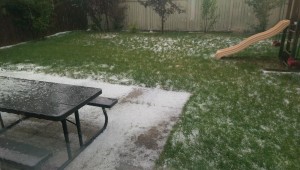 Next comes the rebuild. I mentioned a dollar value earlier – that is based on the quote provided to us by a restoration company, as well as my own estimates of the personal property we had to throw out. I kept a relatively cool head on the day of the flood, and I had spent several hours that night on Google, creating my own estimate of the cost of repairs and replacement (which turned out to not be too far off reality). But, I have to say, when we actually got the $28,000 quote back, that was when I was hit hardest. It was just overwhelming to hear such a large number spoken out loud. Recalling that we have enough insurance to cover the majority those expenses and savings to comfortably handle the rest calmed me back down eventually, but I still remember feeling, at the time, like I might throw up.

We are now looking at a few different ways to minimize damage if another flood occurs in the future. For example, our new washer and dryer have been ordered with six-inch pedestals. We’re also considering a few different alternatives to reinstalling carpet in the entire space. Top contender at the moment is “polished concrete”, but there is still more research to be done and quotes to be requested.

My brother and sis-in-law had bought a pool pump on their way to our house. We decided to keep it, and Luke rigged up a neat system between it and our sump alarm, so that if the water level of the sump gets too high, it will automatically turn on the pool pump instead of simply setting off an alarm. At least, it will do those things if we still have power at the time.

We also tore out the stand-up shower in the basement bathroom. It could potentially have been salvaged, but we planned to replace it one day anyway. That more or less sums up how we view many different aspects of this situation. There are, in some ways, benefits – we will be getting a new washer, dryer, and shower, and now get to redesign the entire space (that’s not to say we were unhappy with the existing space). But – and this is a big “but” – we would have much rather done all of those things on our own time, when we were ready, instead of having the changes thrust upon us by necessity.

I think the worst part (aside from all the obvious stuff) is the paranoia going forward. Every storm warning, every heavy rain has us staring apprehensively out the window and obsessively checking the basement “just in case”. Somehow, I don’t think we will be in a big rush to buy any new furniture for the basement for at least a year. Maybe once we have a full flood-free summer behind us, we’ll relax our shoulders again. Until then – Excuse me while I go check the forecast for the 18th time today.