Thea and the Terrible, Horrible, No Good, Very Bad Day

I thought about writing up a whole separate post about Thea being sick this week, but then I decided I covered all the basics in an email I sent to our families this morning. So, in the interest of laziness, I have simply copied and pasted that message here. And, in the interest of trolling Luke’s brother, I have misplaced a semicolon somewhere within the text.

Just wanted to send a quick (who am I kidding, my notes are never “quick”) note letting you know about the croup that took Thea down for the count last night. She seems to be on the mend now (sleeping at the moment), and should be completely back to normal within a week at most.

She’s had a runny nose for a week (since 2 days after her first day at Daycare, of course), and then she woke up with that distinct seal-bark cough 3 times Thursday morning. I called Health Link in the AM, confirmed it is most likely croup, and that she wasn’t having any trouble breathing, and so they gave some suggestions for managing her symptoms at home (humidifier, plenty of cold liquids, etc.).

She was fairly cranky throughout the day on Thursday, in large part because she was having trouble napping and only went down for 45 minutes over the entire day.

So we put her to bed at 6 PM. She woke up at 9 PM and I could hear a rasp to her breathing that wasn’t there during the day.

She wasn’t in distress at all, but it was still enough that Luke and I scooped her up and went outside for a 20 minute walk while I called Health Link back (cold air is supposed to help). They suggested if it wasn’t clearing up in the cold air after 30 minutes, we should take her into Emergency. So, we did.

We got to the Children’s Hospital at 10:30 PM, had a 1.5 hour wait, and then the doctor gave her Advil (100.4 fever) and a steroid for the throat swelling. We then had to wait in the exam room for another 2 hours so they could make sure her breathing was improved before we went home.

Amazingly, Thea was calm pretty much the whole time from 9 PM until we got home at 3 AM. She was very obviously exhausted, but barely slept (even though they gave us a crib for that last 2 hour wait), and gave us a fair few smiles. 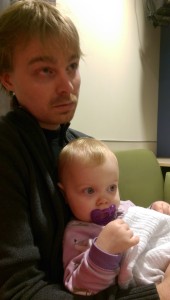 When we got home, she slept from 3 – 6 AM, then cried after being nursed, so we gave her Tylenol, and now I’m just hearing the sounds of her rousing again now at 9:30 AM (she sounds happy, which is nice). I expect she’ll be a bit “off” for the next few days because she had such a messed up night without enough sleep, but I think she’s well past the worst of it now.

Luke and I are short on sleep, but the good news is Luke had started his new work schedule this week, so he now works 4 10-hour days and always has Fridays off, so we’ll be able to tag-team parenting today, and have Grandma and Grandpa McKenna coming over later this morning to provide some relief.

Gotta say – There’s nothing like hanging out in a Children’s Hospital emergency room for a few hours to put things into perspective. Thea will be fine, and we are incredibly lucky for that.

Update: Her day went as expected – She was tired and fussy, but her overall health was definitely improved. We expect tonight will be better.