The Worst (And Best) Things

That’s what I try to remind myself when Thea melts down. She’s only almost two years old. Everything bad that happens to her is the worst thing that’s ever happened to her.

With that in mind, here are the worst things that ever happened to Thea, all of which took place on Monday. She responded accordingly to each worst thing.

#8 (3:40 pm): I was unaware that almond butter – a previous favourite – had been demoted to “not peanut butter”, and so I served it with her snack.

There were probably more “worst things”, but that’s everything that I jotted down at the time.

For the record, this isn’t meant to be a “woe is me for having a temperamental toddler” post. I genuinely think many of the things she gets upset about are hilarious, and I think she will someday too, so I figured I’d note a couple to look back on.

The upside to only being two years old is that everything good that happens to you is the best thing that’s ever happened to you, too.

For example, discovering that fridge magnets also stick to the dishwasher: 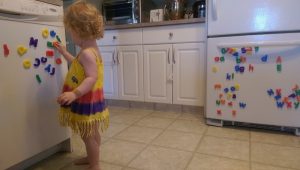 Or wearing a tutu while chasing around a kitty with a cat toy: 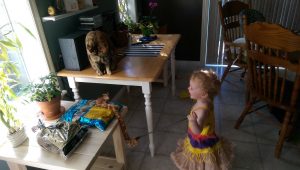 It’s a roller coaster, but it sure as hell is fun!