Sleep is for Amateurs

I am awake, dressed, teeth brushed, the living room is set up (meaning a dozen or so toys have been pulled out and put on the floor), and Thea is still asleep. I honestly can’t remember the last time this happened. I generally stay in bed until she wakes up, savouring every last drop of rest before the day starts sometime between 7 and 9 AM. But this week, Thea has been extremely consistent about waking up very shortly before or after 7 AM, so when Luke’s alarm went off at that time this morning, I figured there was no point in trying to go back to sleep. And now, here I am, listening to the very first sounds of her rousing.

So how did we get here, and what does “sleeping like a baby” look like in this house? Thea started her life like all babies do – sleeping through the majority of the day, and waking several times per night. During the first week, I woke her to feed every three hours. I set an alarm and slept in 2ish-hour shifts (feeds at that time took an hour because I was pumping milk and syringe feeding her, but that’s a story for another post). 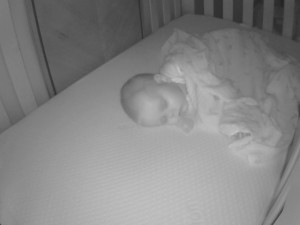 Once she regained her birth weight and we established breastfeeding, I stopped waking her and started feeding on-demand. She was still up roughly every 3, maybe 4 hours. I think the most shocking thing about mommyhood was how well I managed on minimal, interrupted sleep. I expected to be a full-time zombie, stumbling around the house, speaking in grunts to Luke and anyone else who dared to cross our threshold. Don’t get me wrong, I was TIRED, but I also got these random bursts of energy throughout the day where I buzzed around doing laundry, cleaning the kitchen, and making supper. I still get those random bursts of energy, but I’m getting much better at finding other things to do besides housework – important things, like writing blog posts and playing Candy Crush.

Back to sleep…Thea’s sleep gradually improved over the next three months. And then, when she turned 3-months old, she slept 10 hours straight. For three glorious weeks afterwards, she slept 8-12 hours straight every single night. It was magical. Luke and I, unfortunately, made the rookie-parent mistake of getting used to having a full-night’s sleep again. Then came the 4-month regression…

Now, I just read an article the other day which explained the term “regression” is incorrect, because it implies it is temporary, whereas the changes that happen at four months stick around. So, in the interest of accuracy, let’s not use the word regression, let’s use “hell”.

So we entered the 4-month hell, and our wonderful, sleeping baby completely turned on us. Suddenly, she was up three times per night again, and if I dared to try resettling her without whipping out a boob, we were in for an hour-long scream-fest.

It’s important to remember, here, that Thea was up more than three times per night as a newborn. So, strictly speaking, this wasn’t the worst that it had ever been. But logic has no place during the 4 AM scream-fest; it felt like the worst.

In all my infinite wisdom, I decided this was the right time to night-wean her. As she has never accepted a bottle-feed, night weaning seemed like the only way I would ever get the chance, when she woke at 2 AM, to poke Luke and say, “It’s your turn.”

So I tried. And by “tried”, I mean, “I spent an hour attempting to give a screaming baby back her soother before caving and nursing her.” Three times per night. It went super well.

After what felt like 6 months, but was actually more like 6 weeks, I had an “aha!” moment. I was at BabyTalk – a weekly session at the library where a Public Health Nurse is on hand to share information and answer questions. When asked about night-weaning by another mum, she commented that if Baby was ready to night-wean, she would take a minimal feed when picked up, and would really be more interested in cuddles. But, if she takes a full feed, she is genuinely hungry and you will be hard-pressed to drop that feed.

Thea always took a full feed when I relented and offered one. New strategy – Stop trying to night-wean. That week, when she woke, I immediately picked her up and fed her. Within the first day, the scream-fests had stopped, and within the week, she was waking up twice per night, instead of three times.

By accepting that Thea needed me and needed food, the nights suddenly became a heck of a lot more manageable. I was able to get up, go feed her, and get back into bed within 10 minutes or less. Thea fed twice per night for another three months and, two weeks ago, she dropped the second feed, all on her own. My hope is that she will drop the final feed on her own before I’m back to work in September. But we’ll see…

I know, I know, if we had just let her cry-it-out a couple times, we probably would have had an extra few months of sleep. But, despite the rough times, that just never felt like the right choice for us. And if I was ever going to dispense advice, it would be that – Do whatever feels right for you and your family. Because if it doesn’t feel right, I can just about guarantee that your commitment to it will falter at 4 AM.