My baby is one year old. Thea Marie is 28.5 inches tall and weighs 17 pounds and 12 ounces. Her favourite game is peek-a-boo, and her favourite colour is yellow (we suspect). The past year has all-at-once crawled past and flown by.

In future years, once Thea’s vocabulary consists of more than five words, I will “interview” her on her birthday. Things like, “What do you want to be when you grow up?” and “What is your favourite colour/food/ninja turtle?” will be asked, and answers will be recorded in all their verbatim adorableness.

But, for this year, as with most other birthday things for a one-year-old, this post will pretty much be about me. Or, at least, about my perspective. Here are some observations after momming for one year (with some contributions from daddy), punctuated by photos of a magical, shrinking bear: 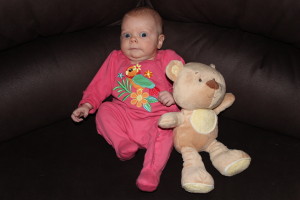 Thing with which I had the biggest love/hate relationship: Napping in my arms. She wouldn’t nap anywhere else for the first few months and I absolutely loved the cuddles and hated being pinned to the couch for several hours of the day.

Funniest declaration that Luke made when I was pregnant: “Well, if I ever get poop on my clothes, I’ll just throw them out.” He says it still hasn’t happened yet and he stands by that statement. I say what he doesn’t know won’t hurt him or our bank account. 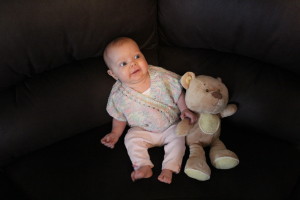 Thing that I already miss: Snuggles. She’s a fairly independent little one, which is great, but I still wouldn’t mind an extra snuggle once in a while. 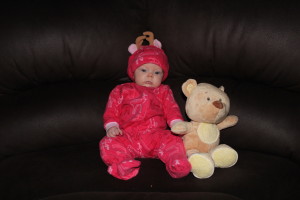 Thing that surprised us the most: How much fun she was at such a young age. We got the first laugh out of her at 3 1/2 months and from that moment on, our days were dedicated to trying to achieve more giggles. We were genuinely shocked by how much fun we could have hanging out with a baby.

Thing that surprised us the least: How little, interrupted sleep we would be permitted. That’s like the one aspect of parenting that every parent drills into you from the moment you announce your pregnancy – “Sleep now, while you can!” It’s kind of hard to be surprised by the frequent wake-ups after that. 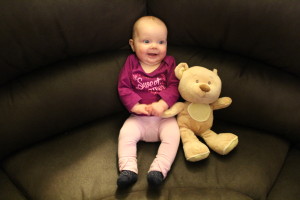 Most irritating parenting comment/advice: It would have to be a tie between, “Oh – Just WAIT!” and “Enjoy every moment, they grow up so fast!” When things were going well, there would always be a more experienced parent waiting to “assure” us that it would probably suck soon, with a “just wait” comment. And when it wasn’t going well, there would always be someone eager to tell you that you’d miss it later – whatever “it” was. This article articulates that part much better than I have done.

Best parenting advice: “Every baby is different.” Don’t compare to others, and don’t judge your kid by any “milestone” charts that you’ll find online. Remembering that makes it a lot easier to relax when your 8-month-old hasn’t started crawling yet, but BabyCentre said most kids do around 6 months. 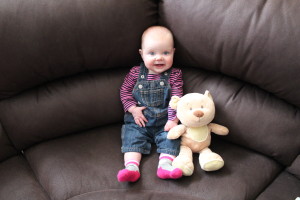 Weird stuff that freaked her out: This was going to be its own post at one point, but as she has since grown out of all of these “fears”, I thought I’d just add them here for a giggle. All these things made Thea cry on at least two occasions: 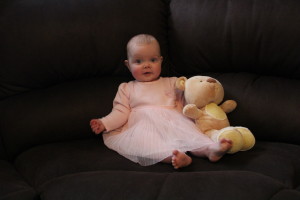 Funniest cousin moment: Thea’s biggest cousin apparently tried a few times to blame Thea for things like hitting her little brother…Even though Thea wasn’t even in the same town at the time. 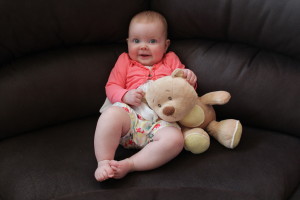 Biggest “Mom Fail”: When, in my rush to clip Thea’s nails before her “Meet the Baby” party, I snipped the tip of her finger. She cried; I cried. It wasn’t a good start to the day. I’ll try clipping her nails again when she’s eight; in the meantime, nail files are the way to go.

Biggest “Mom Win”: Anytime I figured out some new trick. Like recognizing a new signal she makes when she’s tired that means a perfectly-timed nap, or making some new food that is both healthy and a huge hit with the whole family, or realizing that singing a particular song calms her down in the car seat (almost) every time. Those moments always feel like the biggest “win” ever. 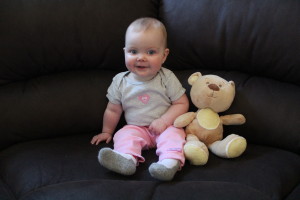 Thing that I did before she was born that, in retrospect, was a really dumb idea: Buttoning- or zipping-up every single sleeper and onesie before putting them in the dresser drawer. Pregnant-me thought, “They look better in the drawer this way.” Parent-me subsequently realized that I then had to go through the extra step of unbuttoning/unzipping them before putting them on her. Duh. 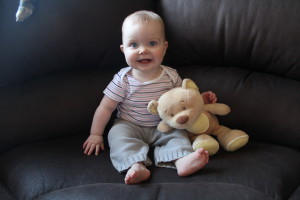 Thing that I thought I needed but didn’t use: A nursing pillow. For the first week, I thought I would need it, but I kept settling into a chair before realizing I’d left it on the other side of the room and was way too lazy to go get it. After that, it got packed away in the hand-me-down box.

Thing I didn’t know I needed but will now give to every new parent at their baby’s shower: A Costco-sized pack of D batteries. Who knew so much baby crap used those?

Thing that she will get sick of long before we do: Her Batman voice. That will never, ever get old for us. 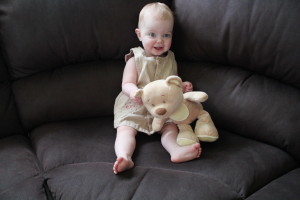 Most irrational thought that I had on multiple occasions during the past year: “I really wish she would get her shit together and become a fully functioning human being already!” This thought usually occurred after picking up a baby, who was once again upset for no reason at all, for the fifth or sixth time in an hour.

Thing we are going to do now that she’s 1 year old that will be really, really hard: Curb our language. Wish us luck, dammit! 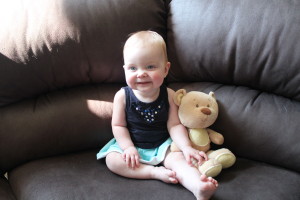 Best part of any day: When we tickle her and she collapses in giggles (Luke added this one, and he is absolutely right). 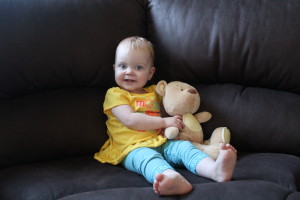 It’s truly amazing the difference that a year can make and astounding how much love I have for this tiny human.