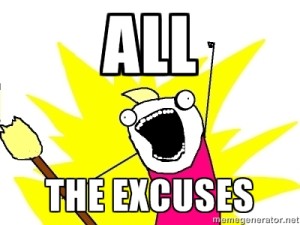 I started back at work September 15th and have been incredibly busy. I wrapped up a course, which involved completing two essays and a final exam by September 30th. Thea started back at daycare on September 15th and, that same evening, got her 12-month vaccinations and started teething. She hasn’t slept through the night fully since. Thea and I have both had nasty colds for the past several days and, before that, it was Luke’s turn. As I write this, I have immense sinus pressure that has given me a migraine.

So, yeah, that’s my excuses. Accept them or not, there they are.

I am, however, determined that this blog will not turn to dust just because life got busier. I still love writing it, and hope, over the next few weeks, to write another specifically about our trip to Nova Scotia last month, and maybe some reflections on the first month as a Work-Out-of-the-Home Mum. But in the meantime, here is the update from September 2015.

We kicked off the month in Nova Scotia, having travelled there primarily to celebrate a beautiful couple at a beautiful wedding. Thea got to meet her Oma and Opa (Luke’s grandparents), and walk on a beach full of great memories from Luke’s childhood. I’ll save more details for a separate post (which will totally come, but not before Thanksgiving). 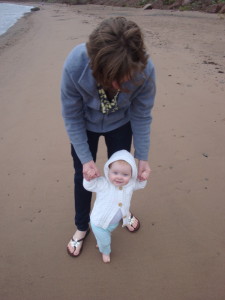 Thea, as mentioned, had her 12-month vaccinations. She cried pretty hard for about five minutes, but I’m happy to report that she had no side effects thereafter, and is now done until 18-months.

Thea also went to her first dental appointment. Her six teeth have come in great. She was given a toothbrush, which we’ll start using now (she likes to chew on her hairbrush when given the chance, I think this should go fairly well).

My maternity leave ended, and I’m fairly settled back into work now. I have developed a standard response to the frequent question about how much I miss Thea: “Do I miss her? Yes, absolutely. Do I miss staying at home with her all day, everyday? No. I’m happy to be back at work.”

Thea turned one year old! She started the day by popping out TWO new teeth. In the afternoon, we celebrated by driving out to a neighbouring town for some of the yummy ice cream for which they are known. Thea, never having tasted ice cream before, was given her own cone with a scoop of vanilla bean. She eagerly took a bite, and was mildly horrified that it was COLD! We convinced her to take a few more tastes, but ultimately, the cone was a much bigger hit than the ice cream. We ended the day with supper at her Grandma and Grandpa’s house. 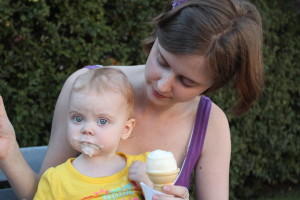 Luke and I also had birthdays this month and so, to celebrate our entire family making it around the sun again, we had a birthday party at our place. It was great fun! 🙂 We ordered in pizza so I had minimal cooking to do, which was a nice change, and Thea had her first taste of cake. It took about 15 minutes to convince her to take a bite, but once that first bit crossed her lips, she was an instant fan.

Rounding out the family birthday month, our favourite nephew turned 2 a couple days after Thea’s birthday. We missed that party though, since he and his sister were sick and our memories of Thea’s bout of croup were still fresh enough that we kept her away.

I went to the monthly Ladies Night with my Mommy Group at an upscale pizzaria called Double Zero Pizza. The food was amazing and the company was even better.

As mentioned, I finished up a Critical Thinking course. I can’t remember if I’ve mentioned it before on this blog, I’m working toward my Bachelor of Management degree through part-time, online studies. It’s slow going, but I’ll get there.

Thea started going to day care part-time (Tuesdays-Thursdays). There are some tears when I drop her off, but from what I know, they stop within a minute or two of me leaving, and then she is a happy little girl for the rest of the day. We get a daily picture and report detailing what she ate and how much, when she pooped/peed, when she napped and for how long. Sounds like overkill, but things like the diaper tracking save us a lot of concern since she’s often on the verge of constipation.

Thea can now pull herself up to standing (though she still doesn’t bother very often). She can also crawl over just about anything and has just started climbing up the stairs. No walking yet, but at this point it seems to be more about confidence than skill. When she holds our hands, she stomps around and doesn’t really “use” us for balance, but she isn’t willing to try walking at all unless she still has two hands helping her. No rush, she’ll let go when she’s ready. 🙂

Thea’s favourite foods this month are some classics from the past: cheese, ham, yogourt, carrots, corn. Really, the only new foods that I can think of are the cake and ice cream!

Our chatterbox can now say a number of words, including duck, yay, hi, mom, daddy, cat, kitty. Some words, like duck and cookie, she is just parroting back at us and doesn’t actually associate with anything just yet, but others she is really getting the hang of now.

Lastly, our big girl is now out of the infant carrier and into a full-size car seat!