We got back our family photos from Morrison Photography (http://morrisonphotography.ca/). The featured image at the top of this post is from that shoot. I’m saving one of the pictures that we ordered for Christmas cards, but they all came out so great!

Thea is still working on walking on her own. No solo steps yet, but she is just starting to be sturdy and confident enough to walk holding one of our hands instead of two. And she pulls herself up to standing and cruises along furniture easily.

On the school front, I’ve been super diligent the past two weeks about putting in 1-2 hours of study every evening after Thea goes to bed, so I’m currently a month ahead in both of my newest courses. It’s a nice change of pace from my usual last minute panic.

We got together with several families from our prenatal class for a first-year birthday celebration for all our munchkins. We made it!

We hosted Thanksgiving at our house and by “hosted”, I actually mean, “we provided the house for the eating of the food.” My brother called me a few weeks beforehand and said he wanted to cook a Thanksgiving meal, but wanted to use my kitchen because it is bigger than his own. So he created the menu and, with our Mum as the sous chef, cooked up a storm over two days. We feasted like royalty and I didn’t have to prepare any of it. Pretty good deal, me thinks. 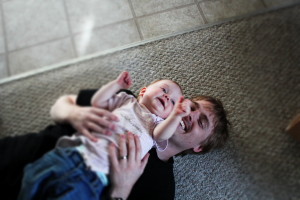 To be fair, I likely would have helped out more with the meal, if it weren’t for my cold. Thea caught a cold near the start of the month and, although she was over it in less than a week, I caught it and battled a sore throat and awful cough for two full weeks. I mostly lost my voice for two days over Thanksgiving, and coughed so much that I actually injured my side. I thought I might have fractured a rib when the pain was worse on the fourth day, but a 5.5 hour visit to urgent care revealed that was not the case. I had inflamed cartilage, for which the treatment is Tylenol and waiting. It’s been another week, and I’m pretty much back to 100%.

On better Thanksgiving news, Thea’s Gramma (my Mum) came to visit for a few days!

Daycare has been going well. We passed a big milestone two weeks ago – it was the first “no tears at dropoff” week. She’d had a day here and there before without, but that was the first time I got smiles when I left three days in a row. Yay!

Luke and I tried out a new restaurant in town for a date night – Brown’s Social House. There are a few locations in Calgary, and one just opened in Chestermere. So much yum. When it’s delicious enough that Luke is even raving about the salad, you know it’s a win. I even went back a few weeks later for supper with some of my favourite ladies and some new lovelies.

This was something of a month for trying new places – we also checked out a new Vietnamese place in town, Van Son. Thea went nuts for the rice noodles and had a few bites of pork wontons from my soup too.

Other than that, I don’t think Thea tried a whole lot of new foods this month. She’s mastered the straw cup and is excellent with an open cup too, but I’m not brave enough to let her hold her own open cup just yet.

Thea has started using a toothbrush twice a day. I’ve been shocked by how into it she is. She’s holding her mouth wide open for the brush from the moment Luke brings her into the bathroom at bedtime. Hopefully her enthusiasm for dental hygiene sticks around for 70 or 80 years.

Thea is understanding more and more words all the time. Her favourite right now is “uh-oh,” which usually means she just dropped something. She’s also learning the names of her bathtub toys (a birthday gift from her auntie and uncle). If you ask her, “Where’s the duck?”, she can pick it out of the ten or so animals in the water. She’s so proud of herself. 🙂

Thea has also started to learn a little sign language at day care. She does a gesture that means she wants more food, and when she’s finished eating, she says, “Done!” and waves her hands.

We had a fun-filled Halloween weekend that started with a party with friends on Friday, board games with my brother on Saturday (had 49 kids come trick-or-treating), and a late lunch with my aunt and cousin on Sunday! The only thing that could have made the weekend better would be if Alberta followed Saskatchewan’s lead and dropped Daylight Savings Time. Thea was unimpressed with the idea of sleeping an hour late, even though we put her to bed an hour late Friday and Saturday.

I finally night-weaned Thea. One night, she woke up at 10:30 PM, Luke went and resettled her in about 15 minutes, and then she slept through until morning. The next night, she slept 12 hours straight. So on Night #3, when she woke up at 10 PM, I decided she’d gone two nights without, so if I ever had a shot at making it permanent, this was it. …Then she screamed for three hours straight. We cuddled and rocked and walked and offered water, but I stuck to my guns and wouldn’t nurse her (though I’m sure Luke would have preferred I did). That was two weeks ago. Since that one bad night, she has slept through every single night on her own. I think there has been two nights in the past two weeks when one of us has had to go in the room, put a soother within reach, and leave. She finds it and then resettles herself. (It also helps that we started putting five soothers in the crib at night, so she can usually find one when she needs it.) Sweet, glorious sleep!

We went to Cobb’s Corn Maze & Family Fun Park near the end of the month – I don’t think I’ve ever seen so many pumpkins on one place! There wasn’t a whole lot that a one-year-old-who-can’t-walk could participate in, but it was still a fun way to spend a Saturday as a family. 🙂