Though there is a good chance her older cousins will continue to refer to her as, “Baby Thea,” into her teen years, we as parents have had to accept that our little girl is growing up. Thea is a toddler. She walks and talks. She dances and winks. She nods “yes” occasionally, and shakes her head “no” often. So very often. Especially at the dinner table.

Don’t get me wrong, Thea is a wonderfully, mercifully happy kid. Even a shaking head is frequently paired with a giant grin as she cheerfully refuses lunch. But the goal is always to avoid or get around the refusal so that, you know, she eats more than fig bars and Cheerios each day.

What do meals look like in our house? What works and what doesn’t? What compromises are we willing to make in order to get something into her belly, and where do we draw the line? How much of this post will still be true tomorrow? Next week? Best not to think about that part…

Backing up, how did we get from syringe-feeding breastmilk at one-week-old to warming up straw cups of cow’s milk at 1.5-years-old?

Well, to sum up the first six months, Thea was born with a tongue tie. Unfortunately, we did not have it cut before we left the hospital and instead came home with a poor handle on breastfeeding and a recommendation to pump and feed her milk from a syringe until she and I got the hang of things. The tongue tie was cut at one week old and, with the support of a public nurse and lactation consultant (yay, Canadian health care!), we were on our way with breastfeeding by two weeks old.

Thea celebrated her six-month birthday with her first taste of carrots, met by this face: 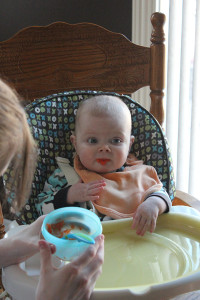 Over the next six months, we moved through purees into truly “solid” foods and it was pretty smooth sailing. Thea enjoyed meat and veggies just as much as dairy and grains. Surprisingly, most fruits were less popular, perhaps because I waited an extra month before offering her any at all, lest she quickly realize it’s awesome and not want to eat anything else ever again.

Looking back, I appreciate that our family doctor told us that, based on the most current information from the Canadian Pediatrics Society, it was not necessary to wait two days between trying “new” foods (other than common allergens). Early on, I offered Thea plain, pureed chicken that looked and smelled like cat food. I didn’t blame her one bit for refusing it and after that day I decided that it didn’t make sense to offer her food that I myself wouldn’t want to eat. So next time, I added lemon and parsley to the chicken and what do you know – it was a hit! It wasn’t long before she was regularly eating the same thing as us (though perhaps with fewer added spices).

Past the first year, Thea’s tastes started to change and her stubborn streak rose up. More meals were refused or even met with tears. Vegetables were out. Most meats were out. Given the option, she would be sustained today by only dairy and grains. Her appetite and pickiness swing up and down several times in a given day or week.

(Side note: I take the lead on planning meals for our family, and so I refer to myself alone in most of the following comments but, naturally, Luke and I have countless ongoing conversations around what is working and what isn’t working with all things “parent”. As with everything that I post, please keep in mind that this only represents what feels right for us may be very different from what makes the most sense for your family.)

Experience has taught us that Thea eats better when we are eating the same thing alongside her. This goes well with the fact that, once Thea was done with purees, I decided that I wouldn’t continue making special meals just for her. Of course, I don’t intentionally cook an entire four-course dinner made up of nothing but foods that I know she hates, but if I’ve made something relatively healthy for our family out of things that I can reasonably assume shouldn’t be met with disdain, then there will be no extra snacks provided if it is refused. With three meals and two snacks a day, Thea generally has food available at the very least every three hours. If a particular meal goes uneaten, I don’t feel like it sends the right message to offer up a different option right away or provide an extra snack an hour later. Milk and water are always available, if requested.

Throughout the week, I try to incorporate a few standbys with some new attempts. Thea has oatmeal every morning, yogurt is a common part of her morning snack, and she usually has sausage, pasta, and/or ham at least once a week. I also try to include a vegetable with every supper, even though they frequently go uneaten. My efforts often seem futile but I keep at it because once in a while a long-refused food is suddenly embraced with such joy that you would think she hadn’t had it on her plate a dozen times before. I figure she’ll definitely never develop broader tastes if I don’t at least keep trying (and there truly is very little waste in putting a tablespoon or two of something new onto her plate, especially if the leftovers can be served a few days in a row).

I’ve also started experimenting with different ways to hide vegetables in food. My most successful trick is to mix a few chopped vegetables with eggs and milk and then bake it all in muffin tins. The flexible recipe that I found for these “crustless quiches” is here. Thea’s even happily eaten spinach in a quiche! Pro-tip: Steam or saute the veggies before putting them in the quiche; they are softer and less likely to be noticed and rejected that way.

Once the food is on the table I will do whatever it takes, short of begging, to get it into her belly. If that means it has to come directly from my plate because that’s better than what’s on her plate (even though they are the exact same thing) – Okay then. If that means she has to poke it and and push it around her tray for seven full minutes in between each mouthful – I’ll wait. If that means the first three bites are delivered via her fork, followed by four by hand, two by my fork, another by hand, and then the next six by her handing bits to me to place into her mouth – She just ate 16 bites and I’m calling it a win. Toddlers are finicky and weird, but I can work with that.

I do draw some lines: Dropping food on the floor is not okay, and quickly results in the plate or bowl being taken away. Crying and screaming for attention are ignored whenever possible, until she calms herself down and we can go back to encouraging bites. And I generally do insist that she take at least one bite. I can’t count the number of times she put up a huge fuss until we managed to get that first bite in, at which point she realized it was delicious and happily ate the rest without complaint.

An added complication to many things that we do is someone else is responsible for what Thea does or doesn’t eat for six snacks and three lunches each week. We are lucky enough to have an excellent day care that posts their monthly menus online (should we care to review them) and gives a daily report through an app of how much she ate of each meal. All things considered, I’m happy with our dual system. Thea is introduced to a greater variety of foods, and we haven’t experienced any kind of a clash between how meals are handled at day care and how we want to manage them at home. At times, Thea even eats better at day care than at home (according to her teachers, she loves oranges, though none have made it past her lips in this household).

All this said, Thea remains a toddler. That means my very best efforts are still regularly met with pursed lips, tears, and food thrown on the floor. Some meals are better than others, some weeks are better than others. All we can do is keep trying and hope that our patience and consistency lead to positive results.

On a related rant, I have a bone to pick with articles about “bad” parenting that begin with an anecdote along the lines of, “I was in a restaurant the other day and saw a dad negotiating with his kid to eat another bite of broccoli before dessert. Negotiating! He’s obviously a pushover who never says no to his devil-child and he represents everything that is wrong with parents today.” Let me be plain – It is unfair to assume that the parenting approach you see in a public setting represents the approach used in all settings. I make exceptions for nearly every principle described in this post when we go out to eat or even when we eat with friends and family in a private home. Why? Because, although I can comfortably allow my kid to pout and wail about what is on the menu at home while I stick to my guns, I don’t think it is fair to make my fellow diners listen to that fit. So we negotiate. If the kids’ menu pasta that arrives at the table is deemed unacceptable by tiny taste buds, we offer what is on our plates or, as a last resort, we pull out Cheerios to occupy her while we finish our own meals. If her face screws up in tears, we very quickly defuse the situation by putting the offending food out of sight and distracting her with (quiet) toys and games. Does this represent our best selves as parents? Absolutely not, but it is one meal once in a while, and we as a family all have a great time and make happy memories, and that’s good enough for me.

Any tips on what has worked for you when attempting to keep your tiny human(s) nourished? Any family-favourite recipes? I’m always looking for more ideas!