Hey, remember that time in 2015 when I started a blog and wrote monthly “Family Updates”? Those went the way of the dodo shortly after my mat leave ended, but I still love rereading them. I captured a lot of milestones and happy memories from Thea’s first year in those posts, so I want the same for at least Finn’s first year. So, they are back! These posts may be of interest only to grandparents and myself, but they’re always clearly labelled so you can feel free to disregard. 🙂

Every day is made a little bit better by these smiles: 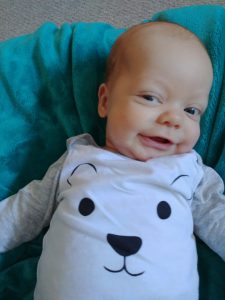 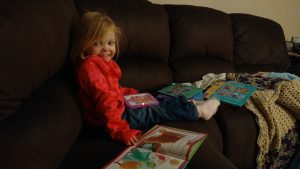 Thea has very thoughtfully been “taking care of” any gifts her brother has been given. She likes to remind us he’s too small to play with toys, so she plays for him.

This could be its own post, but instead I’ll just try to summarize it briefly here – Finn has been followed for jaundice since early December. He was a bit yellow at birth but doctors and public health nurses that saw him in the first few weeks thought it was mild enough that it would fade away on its own. When it didn’t fade by one month, his blood was tested and we were ordered to go to emergency because his bilirubin level was 256. Now, 400 is considered “dangerous”, so he wasn’t quite that bad, but the goal is for bilirubin to be 0, so he was pretty far away from that too. Babies with severe jaundice are lethargic and difficult to feed – The opposite of our small dinosaur. Since Finn had been eating and growing so well, we didn’t have to stay at the hospital. Jaundice can be caused by anything from a mild virus to liver damage, so we had weekly blood tests for the next month to ensure his bilirubin levels steadily decreased. Based on the test results and the fact he was otherwise thriving, our Gastroenterologist concluded he had “breastmilk jaundice”, which basically means my breastmilk was causing a bit of a backup in his liver and he just needed extra time to clear it out. That answer was pretty much the best thing we could hope for, it meant no special treatment was needed, just time and patience. We will have another blood test in two more weeks and again two months later just to make sure he hits that bilirubin target of zero. As always, everyone at the Alberta Children’s Hospital that we interacted with was amazing, we feel so lucky to live so close to it! 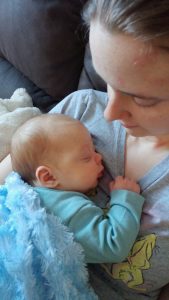 Thea makes us laugh so often, the other day she ate the last peanut butter bite from our freezer, then promptly put the Ziploc baggie in the front entrance to “bring back to Grandma to refill”.

Finn has started smiling at his reflection in the mirror during bath time. He’s also almost giggled a few times, such a ticklish little guy! 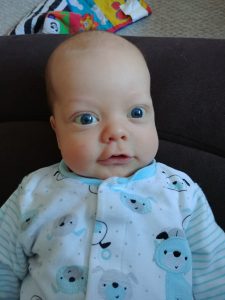 We had a small party in early December for Finn and, in lieu of gifts, asked our friends and family to bring books that would be donated to our local library. Between their contributions and the ones Thea gave up from her own collection, we brought about 40 books to the library this month!

Finn is two months old, we are continuing the tradition started with Thea of taking a monthly photo with a special bear: 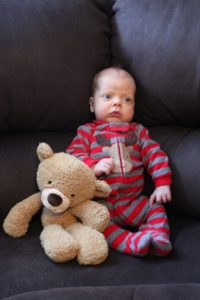 Finn has slept as long as 11 hours straight at night (it was glorious), but for the most part he sleeps 8 hours and then is up once or twice between 2 and 6 am. On a bad night, he only sleeps from 7 to midnight or so and then is up every 60-90 minutes for the rest of the night.

Thea continues to be an amazing big sister. She gets diapers and wipes for me, and when Finn is crying in his car seat, she makes shushing sounds to sooth him. When not in the car seat, Thea tells me that he needs me to pick him up and feed him (if Luke is holding him at the time, she tells him to hand Finn to me). 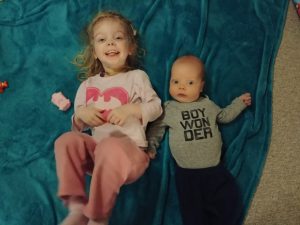 We kicked off the new year with my brother and sister-in-law. A NYE game night with them has become something of a tradition since Thea was born, and one of my favourite traditions at that. Finn very kindly slept from 8:30 pm til 12:05 am so I didn’t miss the countdown.

Thea is very gradually gaining independence. She gets her own snacks from the pantry, usually dresses herself in the morning, and can go to the bathroom all on her own (though she very much prefers we continue to help her with that and most other things). 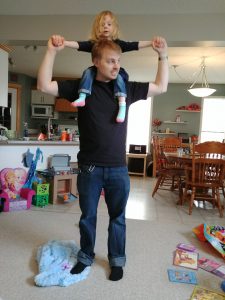 Finn had his first vaccinations. There were a few tears, but he calmed down quickly and had no reaction or symptoms, hurrah!

At daycare, Thea has been mastering recognizing all the letters of the alphabet, practicing writing her name, and has started basic addition and subtraction. That little girl sure does love to read and learn! 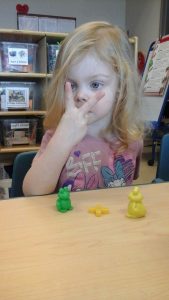 Activity-wise, it’s been a fairly quiet month, probably due in part to the very wintery weather. Thea, Finn, and I did drop by my work for a visit though. I miss the people there but am otherwise enjoying mat leave still and don’t yet feel the strong urge to get back to the office that I had by the end of my last mat leave. I’m sure the feeling will come. 🙂

I made a change and feel great about it: 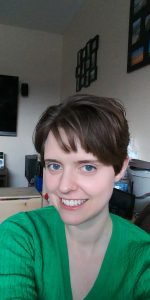 Thea’s imagination is so complex and fun. She builds these whole scenarios where she’s in a boat or on a train and she wants you to join her, then you travel together somewhere like Costco or the Zoo (both of which are conveniently located in our kitchen), and once you “arrive”, you look around or maybe buy something, then travel back home and make supper. There are so many details, it is fun to watch her mind work.

We finished up decorating Thea’s “big girl room”, I absolutely love how it all came together and, more importantly, Thea likes it too! 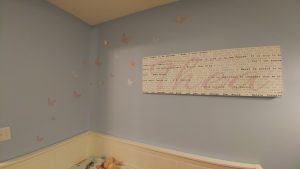 That’s it for January, we’ll be starting February off by flying to Regina for my cousin’s wedding. Can’t wait to see the family!

PS: Bonus picture of Gem, she doesn’t get nearly enough love on this blog: 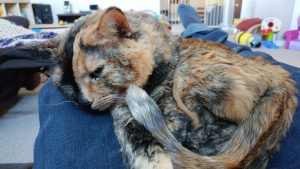