As you can tell from the above photo, it was a snowy month (there are swings buried by snow on that play set)! Here’s what we got up to.

We kicked off February with a trip to Regina for my cousin’s wedding. Our first trip as a family-of-four went better than we could have hoped. The kids did great on the air plane rides with Thea playing and reading in her seat and Finn nursing/snoozing most of the way. Finn was only up once each night and Thea slept great in the hotel room even though we were overlooking the noisy pool. The wedding itself was absolutely beautiful with lots of love and personal vows. The only bummer of it all was we had to leave the reception before the first dance because the kids were just “done” and needed to go to bed. That aside, it was a wonderful, if short, visit with my family.

Luke accepted a buyout package from his employer and will be leaving what has been his job for the past eight years (exact exit date to be determined in early April). He’s going to make a go of contracting from home. Self-employment is both exciting and a little scary, but there is a lot of opportunity and he has a safety net with the package so it’s absolutely the right time to try this thing we’ve talked about for years. Once the exit date is confirmed, I’ll share more details about his skills in case you or anyone you know is in need of a web developer. 🙂

Finn’s jaundice has entirely cleared up, hurray! We still have one more bloodtest and follow-up appointment in April to ensure everything is copacetic.

Thea has been learning to write her own name. On Valentine’s Day, I received this delightful card, signed (backwards) by my marvellous daughter. It’s funny, at 3.5 years old, she’s still very much ambidextrous; she uses her left and right hands with almost equal frequency and skill. When she is colouring, she switches hands constantly, seemingly based on which is more convenient based on where on the page she is colouring. Time will tell if she’ll ever settle on one or the other as a dominant choice. 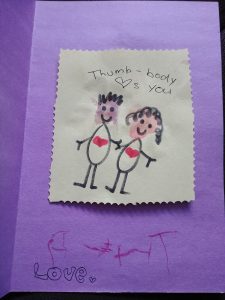 Finn’s favourite thing to do right now (besides eat) is stand. If he’s fussing, putting him up on his feet will often get a few extra smiles. 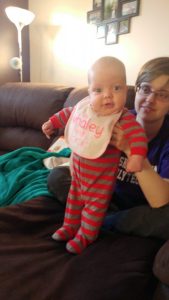 We had a fabulous Family Day long weekend. Thea and Luke went on a Daddy-Daughter adventure on Saturday, and on Monday afternoon we all went to the recreation centre in town for a family fun event full of balloons, activities, and games.

Finn’s 3-month check-up was uneventful (a good thing). His head control is getting better all the time, and he’s rolled from his tummy to his back once or twice. He’s also started giggling and it is the best sound in the world.

If I haven’t mentioned it before, Thea is a very picky eater. BUT, we’ve been seeing some improvements over the last month. She’s been far more willing to at least try foods without any fuss, and has discovered that some things she was sure she didn’t like are actually delicious. She even willingly eats the occasional carrot or apple (raw fruits and vegetables have always been the biggest challenge). Baby steps.

Thea is an incredibly considerate daughter and big sister. Sometimes when we are feeling frustrated or worn out by Finn’s crying, she is the one to remind us that it’s okay to cry. The other night, she and I were playing with LEGOs together and she just paused and said, “I’m happy.” And there is nothing sweeter than an unprompted hug and, “I love you.” 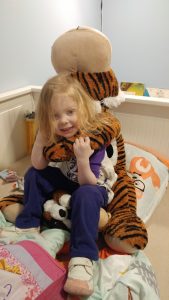 On the sleep front, Finn has been sleeping through the night once or twice a week and is generally only up once per night the other days. I know better than to get used to it though, he’ll be four months old in March, which marked a major regression for Thea, as detailed in this post. He still spends most of his naps in my arms, but I’ve had some success putting him down in the crib for a short morning nap. Will be trying that more often in the coming weeks. 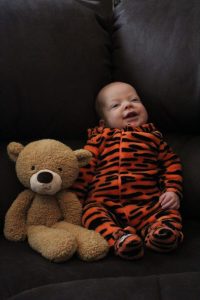 That’s it for this one! Next month, Thea will be going to her first birthday party for a daycare friend. How warm and happy I felt when she got the invitation caught me a bit by surprise. I guess it’s just exciting to know that she has friends that she has made all on her own.