Let the record show that I am drafting this post from an incredibly uncomfortable half-on, half-off the bed position. This is what happens when you expect to only be laying down for a moment because surely the 8th attempt at a crib-nap won’t work either, but then he does fall asleep and you’re too scared of waking him to move.

Thea attended her first birthday party for a daycare friend. She had a great time at the superhero-themed event! 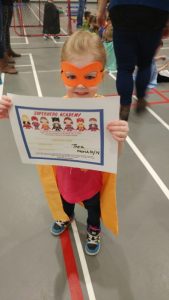 It may not be very “spring-like” outside, but we’ve been in full spring-cleaning mode indoors. Luke built some new shelving for our kitchen cupboards and dining room, I cleaned out our closets, and we rearranged things in the kitchen so that all the kids’ plates, bowls, and cutlery are in a drawer close to the floor so that Thea can get her own stuff and help unload the dishwasher more often.

Finn no longer feels like a “newborn”, but he sure is a happy, giggly baby! He still loves to stand and he’s added a new aspect to this activity – when he’s excited, he stomps his foot.

Thea often tells us she loves us “to the moon and back” and asks us how much we love her in return. Things get pretty elaborate, like, “I love you twice around the sun and three times around the kitchen and back,” or, “I love you so far that I could never reach that point because light travels too slow and would redshift into oblivion before I reached it.” (That last one was Luke, in case you were wondering.)

Finn can’t quite roll from his front to his tummy yet, but he likes to roll onto his side to reach for toys. He’s also found his feet and likes putting everything he can get his hands on into his mouth.

My Mum was visiting this past week and Luke was on vacation. The extra hands were super helpful to me and enabled the aforementioned spring-cleaning.

I’ve had a cold the past week. Since Thea’s had ongoing constipation issues, we’ve often talked to her about the importance of pooping every day to stay healthy. So she very thoughtfully suggested I go have a poop and then my cold will be gone. Ha!

Finn is obsessed with Thea. When she passes by his line of sight, he lights up, stomping, smiling, and cooing for her attention. It’s adorable.

Finn’s sleep has gone a bit sideways this past month. It’s hard to tell if it’s just that four-month regression that I remember Thea going through, or if it’s that I tried to transition him from cuddle-naps to crib-naps (gave up after five days of no-naps), or if it’s that I passed my cold onto him this week. Whatever it is, he’s up at least twice a night, sometimes more. Hopefully a more consistent schedule for the next week helps.

Finn hates his car seat. He usually cries until he passes out or, once in a while, he can be distracted by a toy for a short period. Thea has seemingly noticed this as I’ve discovered toys in his lap (that I didn’t put there) when we arrive at our destination a few times. I guess when he’s upset, Thea tries to help by handing him toys that she can reach from her seat. <3 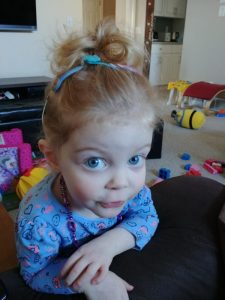 Thea has started a “sportball” class at the Rec Centre. Each week, the kids learn the basics of a different sport. So far she’s tried basketball and hockey and is loving it!

I can’t wait until a few more years from now when Thea can read, she’s so eager to try. Her daycare teachers tell us that she often picks out a book and “reads” it (makes up a story to go with the pictures) to her friends. And lately she’s been trying to understand spelling based on the letters (not sounds) she hears in a word. Like, she thinks her cousin Kaylee’s name is spelled “K-E”, and elephant starts with an “L”.

That’s it for March! April will be kicked off with Easter supper and a visit from the Easter bunny. Rumour has it he’ll be bringing the kids a colouring book and a lamb stuffie.