We kicked things off with Easter. Egg painting, family supper, and, of course, plenty of chocolate. 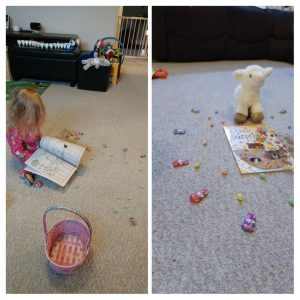 Finn is five months old; his likes include peekaboo, his toy moose, and eating. Dislikes include his car seat, diaper changes, and not eating.

Thea continued her Sportball classes, she tried out soccer, hockey, and baseball this month. She’s loving it. 🙂

We had a rough weekend mid-month. Thea had a fever for four days (a visit to the doctor confirmed it was just a cold), Finn’s sleep regressed so he was up every couple hours at night for a week, and our sump pump acted up right in the middle of the big spring melt to the point where Luke spent one night sleeping on the couch so he could go restart it in the basement every hour or two overnight. Thankfully, he figured out the problem (broken valve) the next evening.

We are LOVING the warmer weather! Yay, spring (finally)! 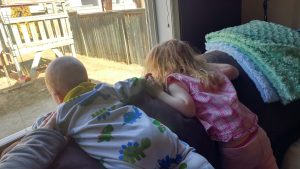 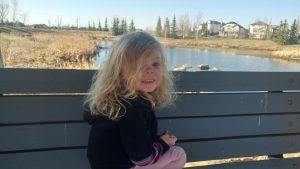 We’ve booked our flights and cottage for an August trip to Nova Scotia; between that and a week in Saskatchewan in July, it’s going to be a busy, fun summer!

Finn got to meet my best friend and her two boys, and we had a fun playdate at YeeHaw in Airdrie. Great place, highly recommend!

Finn had his five-month check-up, he’s a healthy growing boy. 🙂 Our doctor confirmed what we already knew – he has a giant head and a smallish body, so we should have low expectations for when he will crawl and walk (okay, she didn’t use those words exactly, but that was the gist of it, lol).

I started acupuncture for migraine treatment and prevention. I’ve had six sessions over three weeks, and I really do think it’s helping. I’ve still had about one migraine per week but, if you can believe it, that is a notable reduction from the multiple-per-week I’d experienced for a few months prior. It seems like the treatments are eliminating at least some of my triggers, specifically those that related to neck strain, like looking over my shoulder in the car to talk to the kids (yes, that tiny action really was a migraine trigger). I’ll wait another month or so and then maybe write a separate post about the experience and results. 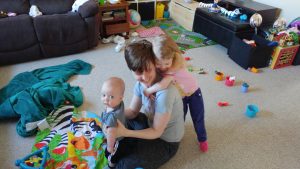 Luke got his exit date from his employer – December 7th. Still a long ways off, so plenty of time to set up his at-home business and line up contract work.

Aside from that one-week regression, I really can’t complain about Finn’s sleep. He’s pretty consistently only up once per night, and resettles easily after feeding. I’m even able to put him in the crib awake and have him put himself to sleep about half the time. Next challenge – convincing him to nap in the crib instead of in my arms…

Nothing like accidentally setting off your fire alarm during supper to remind you that you need to update your fire escape plan for your expanded family! Thea had a lot of questions about the sound, it prompted some good conversations. If you need to flesh out your own plan, this is a great resource.

Had some exciting baby news this month – My cousin had a beautiful baby girl and we found out we have a nephew on the way in September, YAY!

Next month will include a few big milestones for Finn – he’ll be starting sold foods this weekend, and moving into his own bedroom next weekend. Wish us luck!