Finn started solid foods! His first was carrot puree, and he ate more of it than we expected, barely balking at the new taste. Since then he’s tried plenty of foods, some favourites have been oatmeal cereal, strawberries, prunes, corn, peas, bananas, and chicken. He can be impatient about it, grunting and squawking if I’m too slow with the next spoonful. Oh, and he LOVES drinking water from an open cup. If he’s crying in the high chair, he immediately calms down when he sees a cup coming towards him.

Thea finished Sportball! She played hockey, soccer, baseball, basketball, and volleyball. She’s shy, but got more interested and eager to participate as the weeks went on, so we’ve already started another class – outdoor soccer – so we don’t lose that momentum. The soccer presents new challenges since Mum and Dad only watch from the sidelines instead of actively helping, but she’s getting more confident and involved all the time! She even remembers some of the skills from week-to-week, which is cool to see. 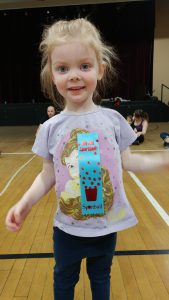 Luke took a week’s vacation mid-month; it was great having him around the house. He put together our new barbecue, installed a ceiling fan in Finn’s room, and we went to the Zoo, spent time with family, and watched two matinees during the week (our first dates since Finn was born). On our sixth anniversary that Saturday, Luke picked me a lilac in the morning (my favourite), we ate supper with the kids outside on a restaurant patio in town, and then we spent an hour in the evening looking through photos from our honeymoon. We got through 2.5 days of the 12-day trip (we took a LOT of photos). Here’s a sample, in case you are curious.

We spent some time hanging out with good friends who have kids close in age to ours. It’s so much fun to see the three year olds racing around and giggling together, and I’m loving that they remember each other between visits, so there is excitement when we say they’ll be taking a swim class together this summer.

Thea and I attended a tea party at the library that was hosted by none other than Belle herself. It was as adorable as it sounds.

I had a harrowing experience with either a wasp or a hornet in my living room during which I hid several feet away from it for several hours until finally trapping it in a bowl and releasing it outside. I’m, like, really brave, guys.

After seeing Thea start to walk away with a stranger who offered her a toy, we realized we need to spend more time talking to her about strangers and safety. Here’s a useful blog post that I saved a while back about “tricky people”. (For the record, the toy offer came from an employee of the store with whom we were chatting at the time; Thea was perfectly safe and in our eye sight during this encounter, it was just a wake-up call for us for the future.)

Finn moved into his own bedroom early in the month. The transition was fairly smooth, no drastic changes to his sleep. He has something of a cycle where he sleeps great for 2-3 weeks, up only once per night, if at all, and then he regresses for a week or so, getting up 2-3 times per night and is often hard to resettle. He’s currently in the middle of one of those regressions, *yawn*

Thea told us a few weeks ago that she’s excited to be all grown up so she will be big enough to start sleeping in our bed with us. LOL, had to explain to her that sharing mommy and daddy’s bed is not part of being a grown up.

We had more wonderful baby news as a baby boy joined my beautiful cousin’s family. <3

I wrapped up another course, the first of 2018. I’ll need to pick up the pace if I’m going to achieve my goal of finishing six by the end of the year!

This last one technically happened in June, not May, but since I’m late posting this anyway – Finn got his first tooth! And then he got his second tooth three days later!