This one is getting posted a few days early since I’ll be in Saskatchewan visiting family over the end of the month. More on that trip in next month’s post!

As mentioned in the last post, Finn popped his first two teeth at the very start of the month. He can also sit up on his own now, which brings a whole new dimension to playtime!

On the sleep front, my cuddle-napper has become an excellent crib-napper! I used a small amount of cry-it-out, just five minutes at a time, and by day two I didn’t even have to go in, he was falling asleep withing 1-5 minutes the vast majority of the time. He’s now napping 30-90 minutes 2-3 times per day in the crib, sometimes with no crying at all.

Finn’s overnights have also improved. He’s sleeping through the night about half the time, and is up only once in the early morning the other half. A contributing factor for this is that he has mastered rolling and now sleeps on his stomach more often than not.

Obviously, we can’t have TWO kids sleeping through the same nights though, that would be madness. So, naturally, Thea is going through some kind of regression that had her up and crying for us in the middle of the night a couple times this past week. Possibly nightmares, possibly just lonely, hard to get a straight answer. Either way, here’s hoping she/we can work through it quickly. 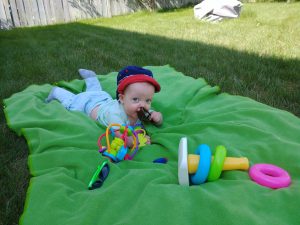 Thea finished her outdoor soccer classes. Next up – Swim class later this month. That one will be interesting, as it’s her first “unparented” sports class where I will drop her off and leave (it’s all of 30 minutes long, but still). Fingers crossed that the fact she’s taking it with one of her best friends helps with any nerves.

Finn was sick at the start of the month. We suspect food poisoning (cause unknown) because he threw up six times in two hours, then napped, and when he woke up and ate, you’d never have known he’d been sick at all, thank goodness.

Thea had a bad reaction to a mosquito bite near her eye mid-month. Thankfully, she didn’t seem very bothered by the bump, and the swelling went down over a few days with the help of a steroid cream. (Yeesh, writing it all down and noting also that Luke currently has a cold, it really sounds like we had a rough month but I swear it was mostly good?)

Finn’s favourite foods right now include all fruit, especially strawberries (he and Thea ate their way through half a container in one sitting a few weeks ago, impressive for a baby, and a 3-year-old who only very recently realized she likes strawberries), and most vegetables, even green beans, but not broccoli. Not a big fan of peanut butter toast yet either, maybe once he has more teeth.

On another food note, I don’t often take pictures of my meals, but this Grilled Lime Salmon with Avocado-Mango Salsa and Coconut Rice was worthy.

Thea went to a movie theatre for the first time; we saw The Incredibles 2 with her aforementioned best friend. This was extra special to me as I have a long-term love of movies that dates back to the very first one I saw in theatres – Aladdin. I was only 4 years old at the time, but I still remember it!

I went to a fun paint afternoon hosted at a friend’s house with the help of Soul Fire Designs.

Thea had a sleepover at Grandma and Grandpa’s house. She didn’t want to come back home with us at the end of it, so I think she had a good time.

We celebrated Luke on Father’s Day with homemade waffles and a questionnaire filled out by a 3.5-year-old. According to Thea, Daddy is “big” years old and her favourite thing that he does is read books to her. 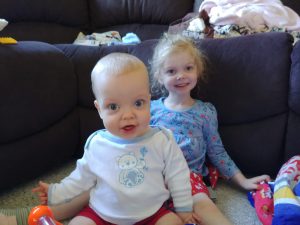 I’m taking the kids across Saskatchewan this weekend – if we survive the 10+ hours in the car (each way), it should be a great trip!