Thea, Finn, and I spent June 29th through July 9th in Saskatchewan. We were first in Cabri to celebrate my Gramma’s 80th birthday, then spent the week in Alida, and concluded the trip with a Springside celebration of my Gr & Gr’s 60th anniversary. My amazing brother and sister-in-law were a huge help during the trip; since we couldn’t all fit in one car (and renting a mini-van is absurdly pricey), Big Brother did the 10-hour (each way) drive alone so that Sis-in-law could help out with the kids and keep me company. Considering how long the travel days were, I’d say the kids did well, even a bit better than I expected. There were some stretches of unhappiness and restlessness for both of them, but overall Finn napped well and Thea was content with the bucket of toys and books I wedged between the two car seats. My personal favourite parts of the trip were seeing Finn experience a pool for the first time (he was a fish, in that he loved it and he badly wanted to drink it), watching Thea dance in the shadow of a kite, playing cards with my Mum, reconnecting with “5-Alive” (the four girls I’ve known since I was 3) and the now EIGHT kids between us, and just getting a chance (however brief) to be with my extended families. The memories always make the long drives worth it. 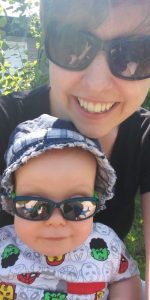 Luke stayed home and, as I described to anyone who asked, he did, “whatever the heck he wanted”. In this instance, that meant sleeping in, hanging out with his family, going to Home Depot five times, building a “Zoo” for the kids’ stuffies, rearranging the living room, making a frame for my painting, handcrafting me a beautiful necklace (a belated Christmas gift), cleaning the house (uninterrupted), and playing video games (also uninterrupted). 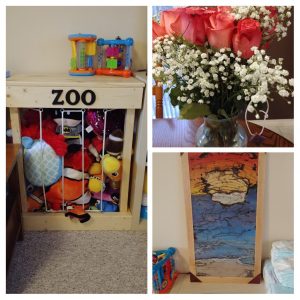 Gemini also stayed home and did whatever the heck she wanted. In this instance, that meant doing the same things she does when we are around. Because she is a cat.

I’ve been trying to make more time for hobbies; I’ll admit, this month that felt extra hard. Life was busy, Thea and Finn were both temperamental, and I was stressed out and not sleeping well for a number of reasons. That said, I tried. I built a puzzle and finished reading The Silkworm.

Finn was up a bit more frequently during the trip, which was understandable because most rooms he slept in were brighter than her pitch-black bedroom at home. He settled right back into routine when we got home though. I’ve also made progress in nursing in that after seven long months of using nipple shields to compensate for his poor latch (and my laziness), he finally got the hang of nursing without them. Also, I no longer have to nurse him right before naps. I’m glad that naturally transitioned as it would have become urgent as my back-to-work date approached in November.

While we were in Saskatchewan, Thea face planted on some pavement because she’s three. She healed up impressively fast, but we noticed almost three weeks later that one of her front teeth is slightly grey. A visit to the dentist this week indicates there is a bit of damage, but it’s not loose so as it’s just a baby tooth it will be left alone unless it starts to hurt her (unlikely). Unfortunately, it will likely remain off-colour until it falls out in a few years. In better news, Thea was actually excited when we told her she was going to the dentist in a few hours, and when they put a cap on a very small chip on another tooth at the same time, the entire office was amazed at how happy and well-behaved she was through the entire procedure. They gave her five small toys to take home, so she was over the moon. 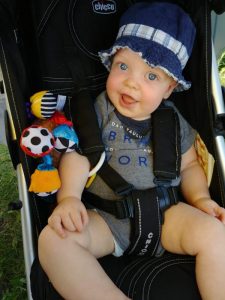 I know I beat this drum a lot, but Thea really is an amazing big sister. There were multiple times during the long Saskatchewan drives when she turned Finn’s tears into giggles. I also understand why they say younger siblings usually take longer to talk though, she’s quick to jump in and answer questions on his behalf, lol 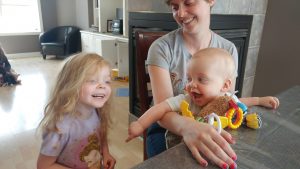 Thea took her first unparented swim class. She was apprehensive about the water but excited about seeing one of her best friends five days in a row. She definitely got braver as the week went on – Day 1, she clung to the lifeguard the whole time; Day 2, she held the lifeguard’s hand the whole time. After that she did a bit better each day, trying things like back floats and blowing bubbles in the water. I was proud. 🙂 Bonus: While the big kids had their class, the babies and mommies were able to play in the nearby splash pool. Finn is a big fan of the water.

Luke gave acupuncture a shot to help his sinus issues that give him semi-regular headaches. So far he unfortunately hasn’t noticed much difference, he’s taking a few weeks off from it, we’ll see if he goes back.

We went with a friend and her two kids to Cobb’s Adventure Park – Highly recommend, even if you’ve been in past years. We last went the first year it opened, and it has expanded a lot since then, so much fun!

Thea and Finn had great summer fun with their cousins. Beaches, kites, nail polish, Legos, bicycles, all that good stuff. 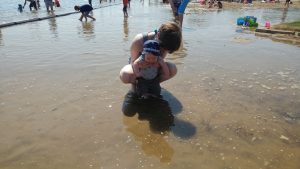 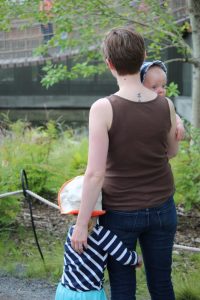 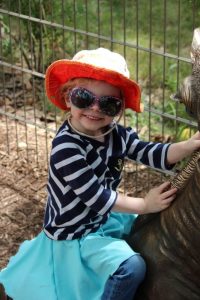 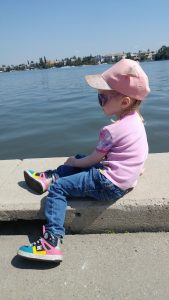 More travels planned next month, can’t wait to introduce Finn to his Oma and Opa, and the ocean!