On the first of the month, we flew to Nova Scotia to spend a week on Cape Breton Island. It was great fun, we spent plenty of time at the beach, Finn put his toes in the ocean for the first time, I finally saw the Cabot Trail, and we got to spend time with the kids’ Oma and Opa. I’ll toss a handful of photos at the bottom of this post, Luke caught some beautiful ones. 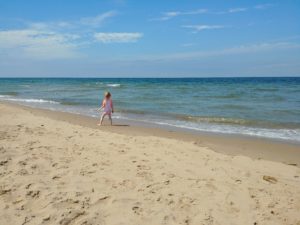 Finn’s been busy the past few weeks! He popped two new teeth, started waving, says “Dada”, and is rolling around so much that we had to start closing the baby gates again. He desperately wants to crawl, but so far has only managed to either spin in circles or push himself backwards. I wish he had more time on the floor to practice, but that is difficult to arrange since he NEVER STOPS EATING. Seriously, he’s a bottomless pit (and I love it).

Also, not to jinx it, but Finn is a champion sleeper. He’s slept 12 hours straight the last 5 nights in a row. His naps are still fairly unpredictable, ranging from 40 minutes to 2.5 hours, but he consistently takes one in the morning and one in the afternoon, so our days have become relatively routine in that regard.

The smoke coming from the west has us finding creative ways to occupy the kids indoors. Walking through malls, visiting with friends, puzzles, colouring, that kind of thing.

Luke and I went to the finale show for GlobalFest. The fireworks were spectacular! 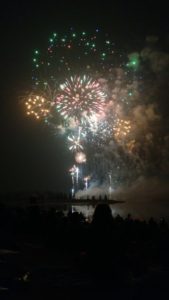 As an early birthday gift, my brother took me to Iliza Shlesinger’s live show mid-month. It was comedy gold and, as an added surprise, we got to meet her at the end of the set! 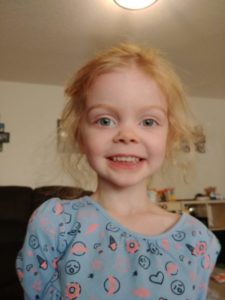 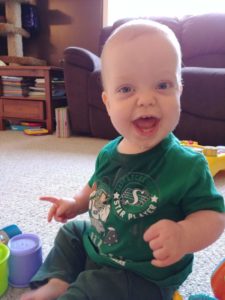 Thea is finishing up the month with a sleepover at Grandma and Grandpa’s house. Bouncy castles, shopping, playing with a cousin that lives nearby, and staying up late? Yeah, I think she’s having a good time. 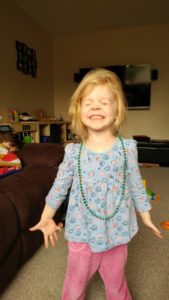 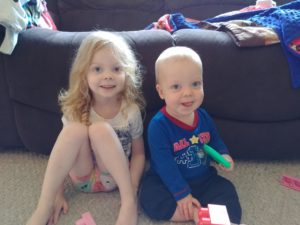 We’ve been planning out Thea’s birthday party. This will be the first time friends from daycare come to celebrate with her. And I’m so excited to give her the gift Luke made. More on that (and photos) next month!